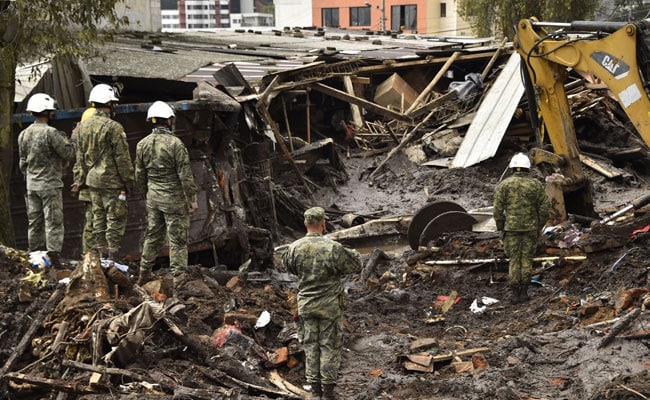 The deluge inundated homes, swamped cars and swept away athletes and spectators on a sports field.

The heaviest flooding to hit Ecuador in two decades has killed at least 24 people in Quito, inundating homes, swamping cars and sweeping away athletes and spectators on a sports field, officials said Tuesday.

Video footage showed torrents of water carrying stones, mud and debris down streets in the Ecuadoran capital, as rescuers helped inhabitants wade through the fast-running currents to safety.

Many in the city of 2.7 million people were taken to shelters, as authorities declared three days of mourning starting Tuesday.

Quito mayor Santiago Guarderas said a downpour had overwhelmed a hillside water catchment structure that had a capacity of 4,500 cubic meters but was inundated with more than four times that volume.

The resultant failure sent a kilometer-long (half-mile-long) deluge through a sports field where volleyball players were practicing with spectators on the sidelines.

“People who were playing couldn’t get away. It grabbed them suddenly,” witness Freddy Barrios Gonzalez told AFP.

“Those who managed to run were saved (but) a family got buried” under a river of mud, added Gonzalez, his own clothes still muddy from the ordeal.

It was not immediately known how many of the players or spectators were among the total number of dead and injured.

Soldiers with rescue dogs were scouring the area around the field for survivors.

Quito police chief Cesar Zapata did not rule out finding more bodies under thousands of cubic meters (cubic feet) of mud and debris left behind by the flood.

Rescuer Cristian Rivera said many people in Quito had to be treated for hypothermia.

The municipality has mobilized heavy machinery to clear roads and fix the failed water catchment system.

Resident Mauro Pinas said he heard “an explosion” when the structure burst, after which “rivers of mud” descended on the city — mainly in the northwest.

Power was lost in some parts after electrical poles were brought down.

Dozens of soldiers were deployed to assist in search and rescue efforts of the police and fire brigades.

The flooding began on the slopes of the Pichincha volcano, which overlooks the nation’s capital.

President Guillermo Lasso, who traveled to China on Monday, offered his condolences on Twitter to those affected.

“We continue to work in search and rescue, containment actions, psychological care and the transfer of injured people to hospital,” he said.

Heavy rains have hit 22 of Ecuador’s 24 provinces since October, leaving at least 18 dead and 24 injured as of Sunday, according to the National Risk Management Service.

Scientists say climate change is intensifying the risk of heavy rain around the world because a warmer atmosphere holds more water.