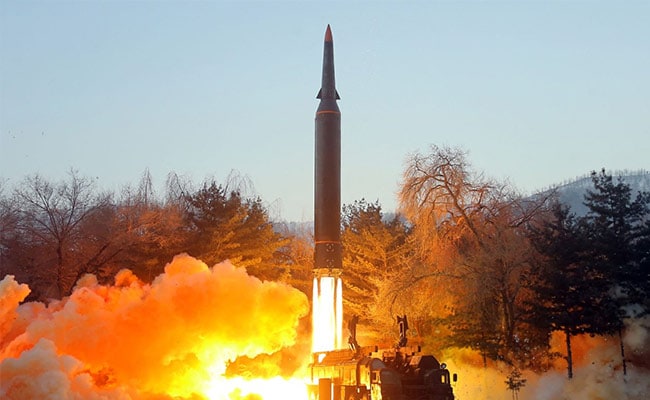 North Korea Missile: This was the second reported test of hypersonic missiles by North Korea.

This was the second reported test of what Pyongyang claimed were hypersonic gliding missiles, as it pursues the sophisticated technology despite international sanctions and condemnation.

Hypersonic missiles move far faster and are more agile than standard ones, making them much harder for missile defence systems — on which the United States is spending billions — to intercept.

The missile fired on Wednesday carried a “hypersonic gliding warhead” that “precisely hit a target 700 km away”, the official Korean Central News Agency (KCNA) reported, without identifying the launcher.

The warhead also demonstrated a “new” capability, moving 120 km laterally after it detached from the launcher to strike the target, it added.

“The successive successes in the test launches in the hypersonic missile sector have strategic significance,” KCNA said.

Hypersonic missiles were listed among the “top priority” tasks for strategic weapons in North Korea’s current five-year plan, and it announced its first test — of the Hwasong-8 — in September last year.

The Wednesday launch also tested the “fuel ampoule system under winter weather conditions”, according to KCNA.

An ampoule system involves a propellant canister attached to the missile when it is manufactured, and could eliminate the need for fuelling it at the launch site.

This offers an advantage over ordinary liquid-fuelled missiles, which have to be loaded with propellant on-site just before launch — a time-consuming process that gives an enemy ample opportunity to locate and destroy them.

Depending on their design, hypersonic missiles can carry conventional and nuclear warheads, and have the potential to alter the strategic balance. They are generally defined as travelling more than five times the speed of sound, or Mach 5.

The KCNA report did not mention the speed at which the missile travelled on Wednesday, and assessments of its performance from other nations have yet to be released.

“It looks like the North Koreans identified hypersonic gliders as a military requirement (probably because they perceive this to be effective at dealing with BMD),” tweeted Ankit Panda of the US think tank Carnegie Endowment for International Peace, referring to ballistic missile defence.

“We’d need independent, detailed data to assess how effective these missiles actually are, but taking the two North Korean statements about the Hwasong-8 and this missile at face value, this test appears to have gone better” than the one in September, Panda added.

Some experts caution that hypersonic weapons may have only limited advantages, while others warn that if North Korea fully develops the technology, it would pose a serious threat.

In the decade since Kim Jong Un took power, his country has made rapid progress in its military technology, at the cost of international sanctions.

In 2021, in addition to the hypersonic Hwasong-8, Pyongyang said it successfully tested a new type of submarine-launched ballistic missile, a long-range cruise missile, and a train-launched weapon.

“This launch is in violation of multiple UN Security Council Resolutions and poses a threat to the DPRK’s neighbours and the international community,” a US State Department spokesperson said, using the official name of North Korea, prior to the KCNA report about a hypersonic test.

Dialogue between Washington and Pyongyang remains stalled, following the collapse of talks between Kim and then US president Donald Trump in 2019.

Under Trump’s successor Joe Biden, the United States has repeatedly declared its willingness to meet North Korean representatives, while saying it will seek denuclearisation.

But Pyongyang has so far dismissed the offer, accusing Washington of pursuing “hostile” policies. North Korea says it needs its arsenal to defend against a US invasion.