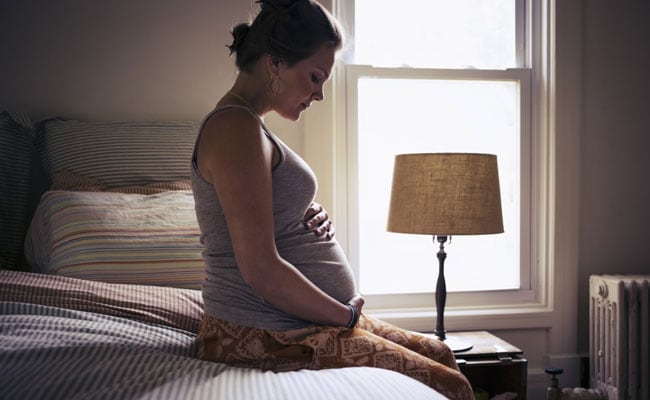 Pregnant women who are positive with Covid-19 when they give birth rarely transmit the virus to their newborns, according to a spate of new research. The reason: Covid isn’t often found in a patient’s bloodstream.

As researchers have raced to understand the effects of Covid on pregnancy and infants, these findings offer good news to expecting parents.

“Analyses show that infection among infants born to women with Covid-19 was uncommon,” said Kate Woodworth, a medical epidemiologist at the Centers for Disease and Prevention.

Even so, a pregnant woman with Covid risks serious illness which can also have negative health consequences for her newborn child even if the baby is born Covid-free. Recent studies have linked Covid-19 infection during pregnancy to both preterm labor and stillbirth.

The CDC released a study in September that found the rate of transmission from mother to baby was under 4%. Another study published last February that looked at data from more than 4,000 women in U.S. and U.K. Covid-19 neonatal registries estimates it’s even lower – around just 2%.

Research indicates that this likely has to do with the lack of virus in an expecting mother’s bloodstream. SARS-CoV-2 isn’t often present in blood samples, indicating that it doesn’t usually enter an infected person’s bloodstream. In one peer-reviewed study, for example, just 6% of patients who visited the emergency room with Covid-19 had the virus in their blood. Other recent data suggest viral presence in blood may be linked to more serious disease.

“For [Covid-19] to reach a pregnant womb, it has to circulate in the bloodstream,” said David Schwartz, a medical epidemiologist and pathologist who until recently taught at the Medical College of Georgia at Augusta University. “And because [Covid-19] is not an agent that circulates in the bloodstream very frequently, there are not going to be a lot of women whose uterus, placenta and baby are exposed to the virus.”

In the small number of newborns who do test positive at birth, the CDC said studies have found most infections to be mild or asymptomatic. The World Health Organization has reported similar findings.

Schwartz’s recent work has focused on the adverse effects Covid can have on pregnancy. He emphasized that there are still many unknowns. Most of the studies on Covid transmission from pregnant women to their newborns, for example, took place before both the omicron and delta variants emerged.

Schwartz and health experts from 12 different countries recently teamed up to analyze placental damage caused by the virus, called placentitis. Damage to the placenta could offer some explanation for why adverse fetal outcomes sometimes do occur, Schwartz and colleagues found in one study published last August. Placental damage may help facilitate transmission of the virus, but, perhaps of bigger concern, it can also starve a baby of necessary oxygen and nutrients.

Denise Jamieson, chief of gynecology and obstetrics at Emory Healthcare in Atlanta, Georgia said that, in most cases, the placenta doesn’t lead to SARS-CoV-2 transplacental transmission, which isn’t true for every virus. The Zika virus, for example, is extremely dangerous to pregnant women because it can more readily cross the placenta and cause severe problems for a fetus, including congenital defects like microcephaly and brain damage. Such complications can occur even when maternal Zika symptoms are mild.

So far, it seems that Covid-19 behaves much more similarly to the flu during pregnancy, Jamieson said. The flu is another virus that is rarely transmitted to the fetus. With the flu, problems with a pregnancy are more closely linked to pregnant women getting sick than transmission of the virus to their unborn child.

Flu vaccines are strongly recommended for pregnant women, not only because they protect expectant mothers from serious illness, but because antibodies from the vaccine can travel through the placenta to help boost babies’ immunity before they’re old enough to get the shot themselves. There’s evidence that the same positive effect can occur with Covid-19 antibodies, offering some level of protection against the virus.

A peer-reviewed study from Weill Cornell Medicine that analyzed umbilical cord blood samples from more than 100 pregnant women during 2021 found that those who were vaccinated during pregnancy began to produce antibodies a few days after their first dose. Just over two weeks later, they began transferring what’s known as “passive immunity” to their babies.

This means that even if an infant is unlikely to catch Covid-19 in the womb, it would have protection against the virus even after entering the world.

“Most babies that test positive are fine,” Schwartz said. “But all of these things look to be increasingly preventable by getting vaccines and getting boosted.”