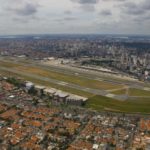 RIO DE JANEIRO, BRAZIL – The Brazilian General Aviation Association (ABAG) has applied to the Federal Court of Accounts for an injunction, pointing to irregularities in the seventh round of airport concessions promoted by the National Agency for Civil Aviation (ANAC), which foresees the permanent extinction of general aviation from Congonhas Airport, the second largest […]

The post Brazil: General aviation is against abandonment of São Paulo/Congonhas city airport appeared first on The Rio Times.